At Speedy Template, You can download Washington Revocation Power of Attorney . There are a few ways to find the forms or templates you need. You can choose forms in your state, use search feature to find the related forms. At the end of each page, there is "Download" button for the forms you are looking form if the forms don't display properly on the page, the Word or Excel or PDF files should give you a better reivew of the page. 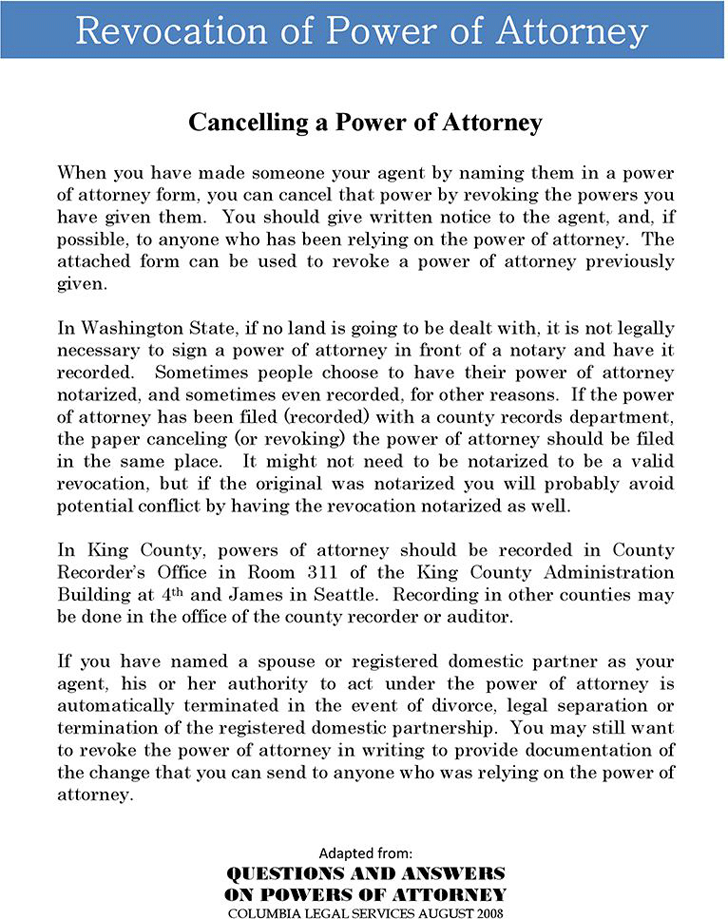 
Cancelling a Power of Attorney
When you have made someone your agent by naming them in a power
of attorney form, you can cancel that power by revoking the powers you
have given them. You should give written notice to the agent, and, if
possible, to anyone who has been relying on the power of attorney. The
attached form can be used to revoke a power of attorney previously
given.
In Washington State, if no land is going to be dealt with, it is not legally
necessary to sign a power of attorney in front of a notary and have it
recorded. Sometimes people choose to have their power of attorney
notarized, and sometimes even recorded, for other reasons. If the power
of attorney has been filed (recorded) with a county records department,
the paper canceling (or revoking) the power of attorney should be filed
in the same place. It might not need to be notarized to be a valid
revocation, but if the original was notarized you will probably avoid
potential conflict by having the revocation notarized as well.
In King County, powers of attorney should be recorded in County
Recorder’s Office in Room 311 of the King County Administration
Building at 4
th
and James in Seattle. Recording in other counties may
be done in the office of the county recorder or auditor.
If you have named a spouse or registered domestic partner as your
agent, his or her authority to act under the power of attorney is
automatically terminated in the event of divorce, legal separation or
termination of the registered domestic partnership. You may still want
to revoke the power of attorney in writing to provide documentation of
the change that you can send to anyone who was relying on the power of
attorney.


Adaptedfrom:
QUESTIONS AND ANSWERS
ON POWERS OF ATTORNEY
COLUMBIA LEGAL SERVICES AUGUST 2008
Revocation of Power of Attorney
Next
Download
Washington Revocation Power of Attorney
PDF | 115 KB | 2 Pages
Previous