At Speedy Template, You can download Teaching Philosophy Example 1 . There are a few ways to find the forms or templates you need. You can choose forms in your state, use search feature to find the related forms. At the end of each page, there is "Download" button for the forms you are looking form if the forms don't display properly on the page, the Word or Excel or PDF files should give you a better reivew of the page. 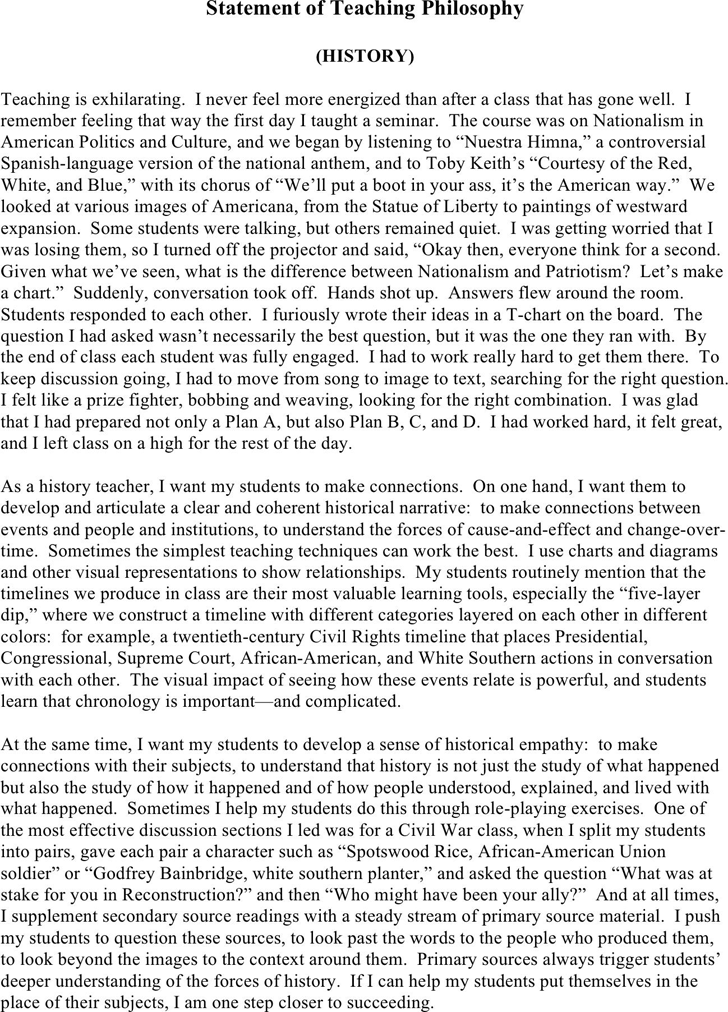 Statement of Teaching Philosophy
(HISTORY)
Teaching is exhilarating. I never feel more energized than after a class that has gone well. I
remember feeling that way the first day I taught a seminar. The course was on Nationalism in
American Politics and Culture, and we began by listening to “Nuestra Himna,” a controversial
Spanish-language version of the national anthem, and to Toby Keith’s “Courtesy of the Red,
White, and Blue,” with its chorus of “We’ll put a boot in your ass, it’s the American way.” We
looked at various images of Americana, from the Statue of Liberty to paintings of westward
expansion. Some students were talking, but others remained quiet. I was getting worried that I
was losing them, so I turned off the projector and said, “Okay then, everyone think for a second.
Given what we’ve seen, what is the difference between Nationalism and Patriotism Let’s make
a chart.” Suddenly, conversation took off. Hands shot up. Answers flew around the room.
Students responded to each other. I furiously wrote their ideas in a T-chart on the board. The
question I had asked wasn’t necessarily the best question, but it was the one they ran with. By
the end of class each student was fully engaged. I had to work really hard to get them there. To
keep discussio
n going, I had to move from song to image to text, searching for the right question.
I felt like a prize fighter, bobbing and weaving, looking for the right combination. I was glad
that I had prepared not only a Plan A, but also Plan B, C, and D. I had worked hard, it felt great,
and I left class on a high for the rest of the day.
As a history teacher, I want my students to make connections. On one hand, I want them to
develop and articulate a clear and coherent historical narrative: to make connections between
events and people and institutions, to understand the forces of cause-and-effect and change-over-
time. Sometimes the simplest teaching techniques can work the best. I use charts and diagrams
and other visual representations to show relationships. My students routinely mention that the
timelines we produce in class are their most valuable learning tools, especially the “five-layer
dip,” where we construct a timeline with different categories layered on each other in different
colors: for example, a twentieth-century Civil Rights timeline that places Presidential,
Congressional, Supreme Court, African-American, and White Southern actions in conversation
with each other. The visual impact of seeing how these events relate is powerful, and students
learn that chronology is important—and complicated.
At the same time, I want my students to develop a sense of historical empathy: to make
connections with their subjects, to understand that history is not just the study of what happened
but also the study of how it happened and of how people understood, explained, and lived with
what happened. Sometimes I help my students do this through role-playing exercises. One of
the most effective discussion sections I led was for a Civil War class, when I split my students
into pairs, gave each pair a character such as “Spotswood Rice, African-American Union
soldier” or “Godfrey Bainbridge, white southern planter,” and asked the question “What was at
stake for you in Reconstruction” and then “Who might have been your ally” And at all times,
I supplement secondary source readings with a steady stream of primary source material. I push
my students to question these sources, to look past the words to the people who produced them,
to look beyond the images to the context around them. Primary sources always trigger students’
deeper understanding of the forces of history. If I can help my students put themselves in the
place of their subjects, I am one step closer to succeeding.
Next
Download
Teaching Philosophy Example 1
PDF | 1025 KB | 10 Pages
Previous