At Speedy Template, You can download Lease Extension Agreement 2 . There are a few ways to find the forms or templates you need. You can choose forms in your state, use search feature to find the related forms. At the end of each page, there is "Download" button for the forms you are looking form if the forms don't display properly on the page, the Word or Excel or PDF files should give you a better reivew of the page. 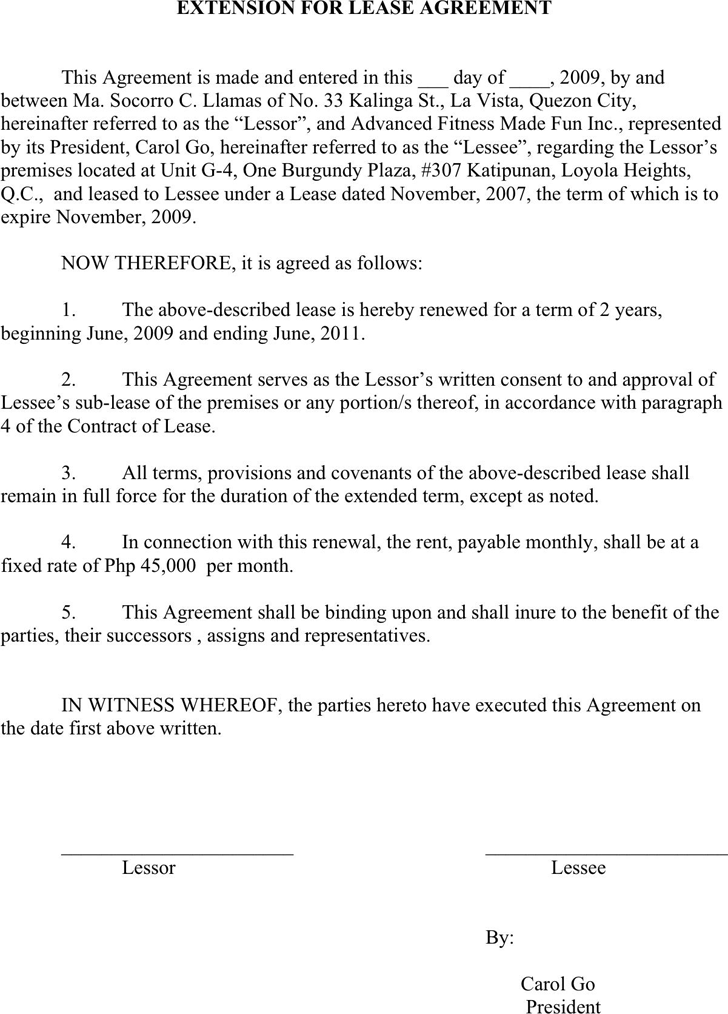 EXTENSION FOR LEASE AGREEMENT
This Agreement is made and entered in this ___ day of ____, 2009, by and
between Ma. Socorro C. Llamas of No. 33 Kalinga St., La Vista, Quezon City,
hereinafter referred to as the “Lessor”, and Advanced Fitness Made Fun Inc., represented
by its President, Carol Go, hereinafter referred to as the “Lessee”, regarding the Lessor’s
premises located at Unit G-4, One Burgundy Plaza, #307 Katipunan, Loyola Heights,
Q.C., and leased to Lessee under a Lease dated November, 2007, the term of which is to
expire November, 2009.
NOW THEREFORE, it is agreed as follows:
1. The above-described lease is hereby renewed for a term of 2 years,
beginning June, 2009 and ending June, 2011.
2. This Agreement serves as the Lessor’s written consent to and approval of
Lessee’s sub-lease of the premises or any portion/s thereof, in accordance with paragraph
4 of the Contract of Lease.
3. All terms, provisions and covenants of the above-described lease shall
remain in full force for the duration of the extended term, except as noted.
4. In connection with this renewal, the rent, payable monthly, shall be at a
fixed rate of Php 45,000 per month.
5. This Agreement shall be binding upon and shall inure to the benefit of the
parties, their successors , assigns and representatives.
IN WITNESS WHEREOF, the parties hereto have executed this Agreement on
the date first above written.
_______________________ ________________________
Lessor Lessee
By:
Carol Go
President
Next
Download
Lease Extension Agreement 2
DOC | 29 KB | 2 Pages
Previous