At Speedy Template, You can download Rhode Island Statutory Power of Attorney Form . There are a few ways to find the forms or templates you need. You can choose forms in your state, use search feature to find the related forms. At the end of each page, there is "Download" button for the forms you are looking form if the forms don't display properly on the page, the Word or Excel or PDF files should give you a better reivew of the page.
The Rhode Island statutory power of attorney is a statutory form of Rhode Island used by the grantor to authorize the attorney-in-fact to act on his/her behalf in his/her property and other related matters. 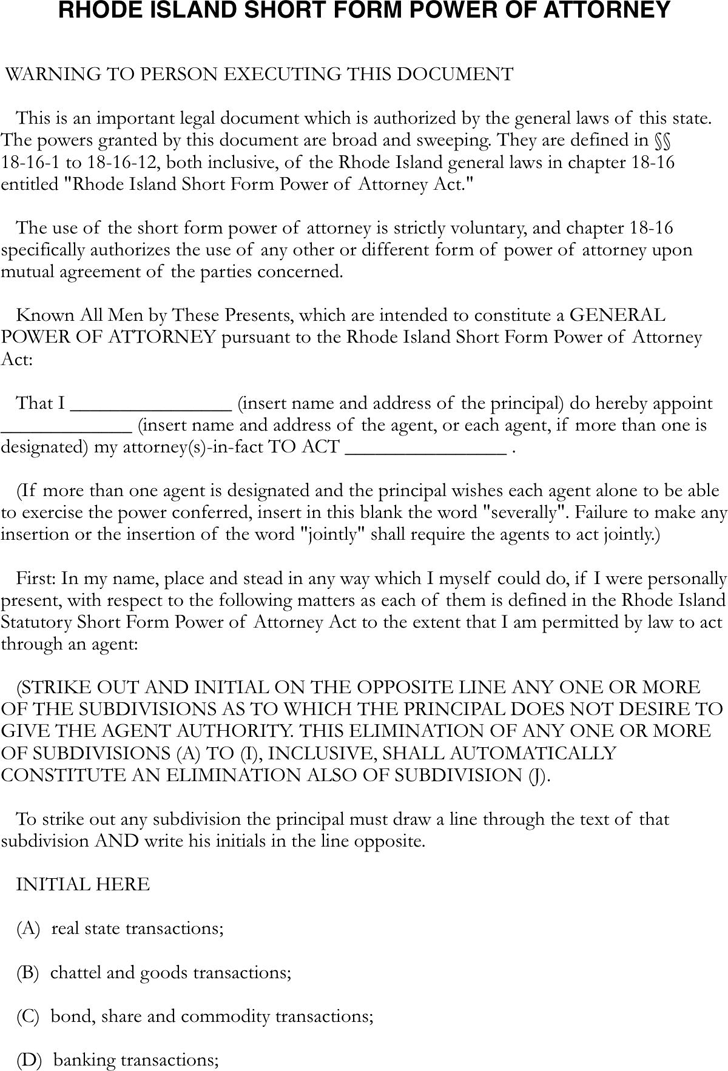 RHODE ISLAND SHORT FORM POWER OF ATTORNEY
WARNING TO PERSON EXECUTING THIS DOCUMENT
This is an important legal document which is authorized by the general laws of this state.
The powers granted by this document are broad and sweeping. They are defined in §§
18-16-1 to 18-16-12, both inclusive, of the Rhode Island general laws in chapter 18-16
entitled "Rhode Island Short Form Power of Attorney Act."
The use of the short form power of attorney is strictly voluntary, and chapter 18-16
specifically authorizes the use of any other or different form of power of attorney upon
mutual agreement of the parties concerned.
Known All Men by These Presents, which are intended to constitute a GENERAL
POWER OF ATTORNEY pursuant to the Rhode Island Short Form Power of Attorney
Act:
That I ________________ (insert name and address of the principal) do hereby appoint
_____________ (insert name and address of the agent, or each agent, if more than one is
designated) my attorney(s)-in-fact TO ACT ________________ .
(If more than one agent is designated and the principal wishes each agent alone to be able
to exercise the power conferred, insert in this blank the word "severally". Failure to make any
insertion or the insertion of the word "jointly" shall require the agents to act jointly.)
First: In my name, place and stead in any way which I myself could do, if I were personally
present, with respect to the following matters as each of them is defined in the Rhode Island
Statutory Short Form Power of Attorney Act to the extent that I am permitted by law to act
through an agent:
(STRIKE OUT AND INITIAL ON THE OPPOSITE LINE ANY ONE OR MORE
OF THE SUBDIVISIONS AS TO WHICH THE PRINCIPAL DOES NOT DESIRE TO
GIVE THE AGENT AUTHORITY. THIS ELIMINATION OF ANY ONE OR MORE
OF SUBDIVISIONS (A) TO (I), INCLUSIVE, SHALL AUTOMATICALLY
CONSTITUTE AN ELIMINATION ALSO OF SUBDIVISION (J).
To strike out any subdivision the principal must draw a line through the text of that
subdivision AND write his initials in the line opposite.
INITIAL HERE
(A) real state transactions;
(B) chattel and goods transactions;
(C) bond, share and commodity transactions;
(D) banking transactions;
Next
Download
Rhode Island Statutory Power of Attorney Form
PDF | 46 KB | 3 Pages
Previous