At Speedy Template, You can download Personal Statement Example 1 . There are a few ways to find the forms or templates you need. You can choose forms in your state, use search feature to find the related forms. At the end of each page, there is "Download" button for the forms you are looking form if the forms don't display properly on the page, the Word or Excel or PDF files should give you a better reivew of the page. 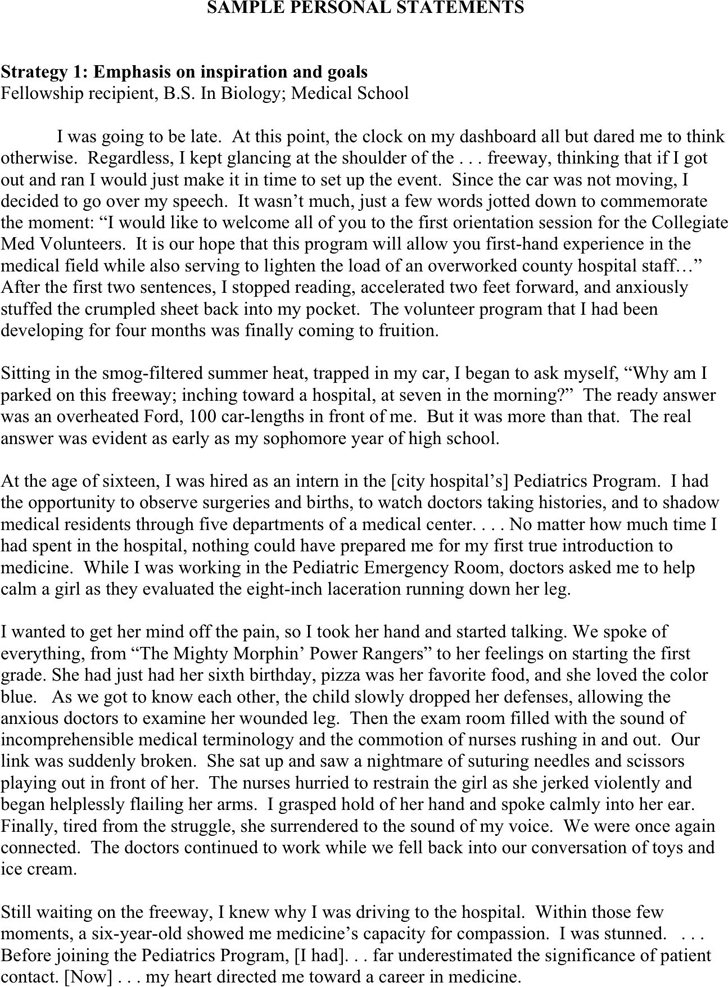 SAMPLE PERSONAL STATEMENTS
Strategy 1: Emphasis on inspiration and goals
Fellowship recipient, B.S. In Biology; Medical School
I was going to be late. At this point, the clock on my dashboard all but dared me to think
otherwise. Regardless, I kept glancing at the shoulder of the . . . freeway, thinking that if I got
out and ran I would just make it in time to set up the event. Since the car was not moving, I
decided to go over my speech. It wasn’t much, just a few words jotted down to commemorate
the moment: “I would like to welcome all of you to the first orientation session for the Collegiate
Med Volunteers. It is our hope that this program will allow you first-hand experience in the
medical field while also serving to lighten the load of an overworked county hospital staff…”
After the first two sentences, I stopped reading, accelerated two feet forward, and anxiously
stuffed the crumpled sheet back into my pocket. The volunteer program that I had been
developing for four months was finally coming to fruition.
Sitting in the smog-filtered summer heat, trapped in my car, I began to ask myself, “Why am I
parked on this freeway; inching toward a hospital, at seven in the morning” The ready answer
was an overheated Ford, 100 car-lengths in front of me. But it was more than that. The real
answer was evident as early as my sophomore year of high school.
At the age of sixteen, I was hired as an intern in the [city hospital’s] Pediatrics Program. I had
the opportunity to observe surgeries and births, to watch doctors taking histories, and to shadow
medical residents through five departments of a medical center. . . . No matter how much time I
had spent in the hospital, nothing could have prepared me for my first true introduction to
medicine. While I was working in the Pediatric Emergency Room, doctors asked me to help
calm a girl as they evaluated the eight-inch laceration running down her leg.
I wanted to get her mind off the pain, so I took her hand and started talking. We spoke of
everything, from “The Mighty Morphin’ Power Rangers” to her feelings on starting the first
grade. She had just had her sixth birthday, pizza was her favorite food, and she loved the color
blue. As we got to know each other, the child slowly dropped her defenses, allowing the
anxious doctors to examine her wounded leg. Then the exam room filled with the sound of
incomprehensible medical terminology and the commotion of nurses rushing in and out. Our
link was suddenly broken. She sat up and saw a nightmare of suturing needles and scissors
playing out in front of her. The nurses hurried to restrain the girl as she jerked violently and
began helplessly flailing her arms. I grasped hold of her hand and spoke calmly into her ear.
Finally, tired from the struggle, she surrendered to the sound of my voice. We were once again
connected. The doctors continued to work while we fell back into our conversation of toys and
ice cream.
Still waiting on the freeway, I knew why I was driving to the hospital. Within those few
moments, a six-year-old showed me medicine’s capacity for compassion. I was stunned. . . .
Before joining the Pediatrics Program, [I had]. . . far underestimated the significance of patient
contact. [Now] . . . my heart directed me toward a career in medicine.
Next
Download
Personal Statement Example 1
PDF | 78 KB | 6 Pages
Previous