At Speedy Template, You can download Oregon Parental Guardianship Power of Attorney Form . There are a few ways to find the forms or templates you need. You can choose forms in your state, use search feature to find the related forms. At the end of each page, there is "Download" button for the forms you are looking form if the forms don't display properly on the page, the Word or Excel or PDF files should give you a better reivew of the page. 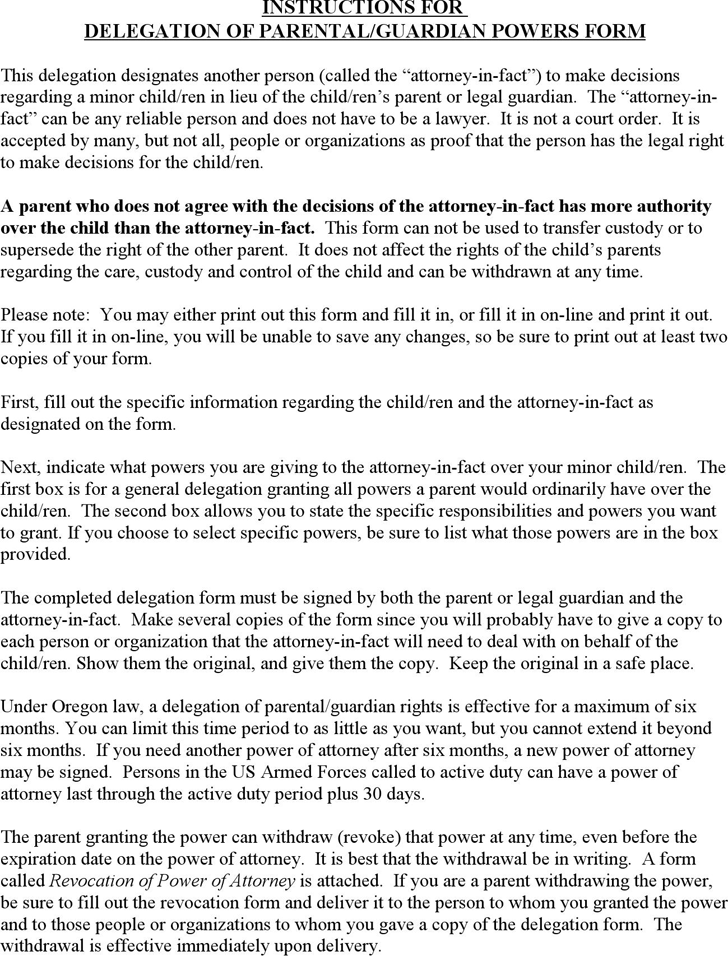 INSTRUCTIONS FOR
DELEGATION OF PARENTAL/GUARDIAN POWERS FORM
This delegation designates another person (called the “attorney-in-fact”) to make decisions
regarding a minor child/ren in lieu of the child/ren’s parent or legal guardian. The “attorney-in-
fact” can be any reliable person and does not have to be a lawyer. It is not a court order. It is
accepted by many, but not all, people or organizations as proof that the person has the legal right
to make decisions for the child/ren.
A parent who does not agree with the decisions of the attorney-in-fact has more authority
over the child than the attorney-in-fact. This form can not be used to transfer custody or to
supersede the right of the other parent. It does not affect the rights of the child’s parents
regarding the care, custody and control of the child and can be withdrawn at any time.
Please note: You may either print out this form and fill it in, or fill it in on-line and print it out.
If you fill it in on-line, you will be unable to save any changes, so be sure to print out at least two
copies of your form.
First, fill out the specific information regarding the child/ren and the attorney-in-fact as
designated on the form.
Next, indicate what powers you are giving to the attorney-in-fact over your minor child/ren. The
first box is for a general delegation granting all powers a parent would ordinarily have over the
child/ren. The second box allows you to state the specific responsibilities and powers you want
to grant. If you choose to select specific powers, be sure to list what those powers are in the box
provided.
The completed delegation form must be signed by both the parent or legal guardian and the
attorney-in-fact. Make several copies of the form since you will probably have to give a copy to
each person or organization that the attorney-in-fact will need to deal with on behalf of the
child/ren. Show them the original, and give them the copy. Keep the original in a safe place.
Under Oregon law, a delegation of parental/guardian rights is effective for a maximum of six
months. You can limit this time period to as little as you want, but you cannot extend it beyond
six months. If you need another power of attorney after six months, a new power of attorney
may be signed. Persons in the US Armed Forces called to active duty can have a power of
attorney last through the active duty period plus 30 days.
The parent granting the power can withdraw (revoke) that power at any time, even before the
expiration date on the power of attorney. It is best that the withdrawal be in writing. A form
called Revocation of Power of Attorney is attached. If you are a parent withdrawing the power,
be sure to fill out the revocation form and deliver it to the person to whom you granted the power
and to those people or organizations to whom you gave a copy of the delegation form. The
withdrawal is effective immediately upon delivery.
Next
Download
Oregon Parental Guardianship Power of Attorney Form
PDF | 124 KB | 4 Pages
Previous