At Speedy Template, You can download Novation Agreement 3 . There are a few ways to find the forms or templates you need. You can choose forms in your state, use search feature to find the related forms. At the end of each page, there is "Download" button for the forms you are looking form if the forms don't display properly on the page, the Word or Excel or PDF files should give you a better reivew of the page. 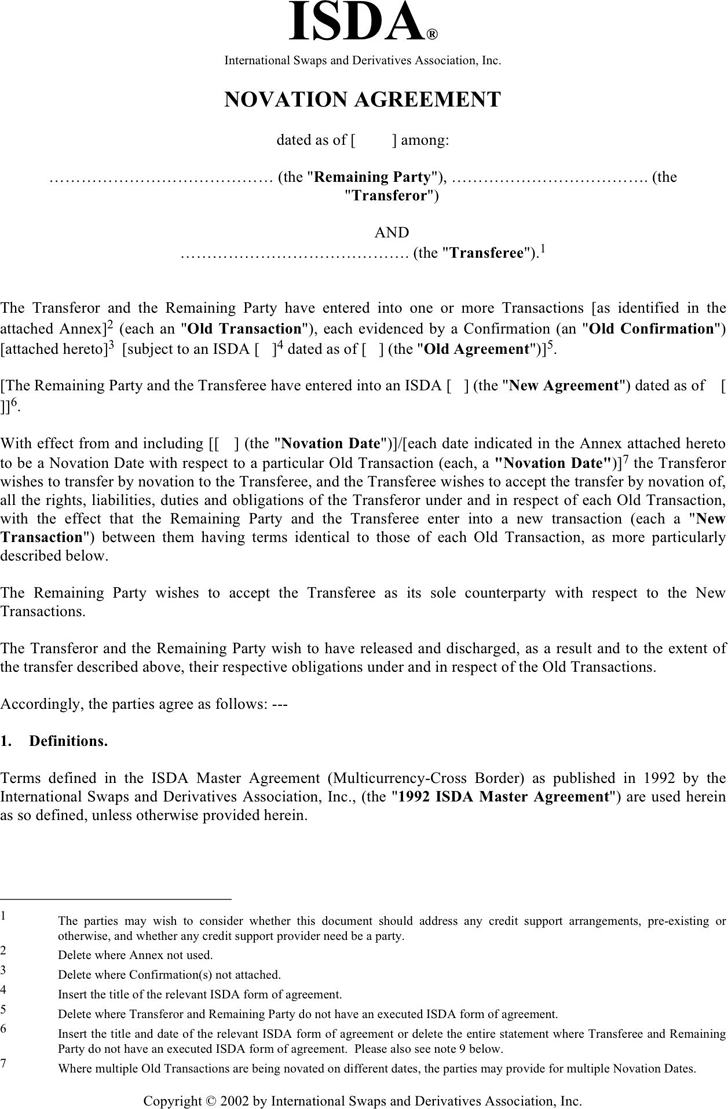 Copyright © 2002 by International Swaps and Derivatives Association, Inc.
ISDA®
International Swaps and Derivatives Association, Inc.
NOVATION AGREEMENT
dated as of [ ] among:
…………………………………… (the "Remaining Party"), ………………………………. (the
"Transferor")
AND
……………………………………. (the "Transferee").
1
The Transferor and the Remaining Party have entered into one or more Transactions [as identified in the
attached Annex]
2
(each an "Old Transaction"), each evidenced by a Confirmation (an "Old Confirmation")
[attached hereto]
3
[subject to an ISDA [ ]
4
dated as of [ ] (the "Old Agreement")]
5
.
[The Remaining Party and the Transferee have entered into an ISDA [ ] (the "New Agreement") dated as of [
]]
6
.
With effect from and including [[ ] (the "Novation Date")]/[each date indicated in the Annex attached hereto
to be a Novation Date with respect to a particular Old Transaction (each, a "Novation Date")]
7
the Transferor
wishes to transfer by novation to the Transferee, and the Transferee wishes to accept the transfer by novation of,
all the rights, liabilities, duties and obligations of the Transferor under and in respect of each Old Transaction,
with the effect that the Remaining Party and the Transferee enter into a new transaction (each a "New
Transaction") between them having terms identical to those of each Old Transaction, as more particularly
described below.
The Remaining Party wishes to accept the Transferee as its sole counterparty with respect to the New
Transactions.
The Transferor and the Remaining Party wish to have released and discharged, as a result and to the extent of
the transfer described above, their respective obligations under and in respect of the Old Transactions.
Accordingly, the parties agree as follows: ---
1. Definitions.
Terms defined in the ISDA Master Agreement (Multicurrency-Cross Border) as published in 1992 by the
International Swaps and Derivatives Association, Inc., (the "1992 ISDA Master Agreement") are used herein
as so defined, unless otherwise provided herein.
1
The parties may wish to consider whether this document should address any credit support arrangements, pre-existing or
otherwise, and whether any credit support provider need be a party.
2
Delete where Annex not used.
3
Delete where Confirmation(s) not attached.
4
Insert the title of the relevant ISDA form of agreement.
5
Delete where Transferor and Remaining Party do not have an executed ISDA form of agreement.
6
Insert the title and date of the relevant ISDA form of agreement or delete the entire statement where Transferee and Remaining
Party do not have an executed ISDA form of agreement. Please also see note 9 below.
7
Where multiple Old Transactions are being novated on different dates, the parties may provide for multiple Novation Dates.
Next
Download
Novation Agreement 3
DOC | 57 KB | 5 Pages
Previous