At Speedy Template, You can download New Brunswick Joint Petition for Divorce Form . There are a few ways to find the forms or templates you need. You can choose forms in your state, use search feature to find the related forms. At the end of each page, there is "Download" button for the forms you are looking form if the forms don't display properly on the page, the Word or Excel or PDF files should give you a better reivew of the page. 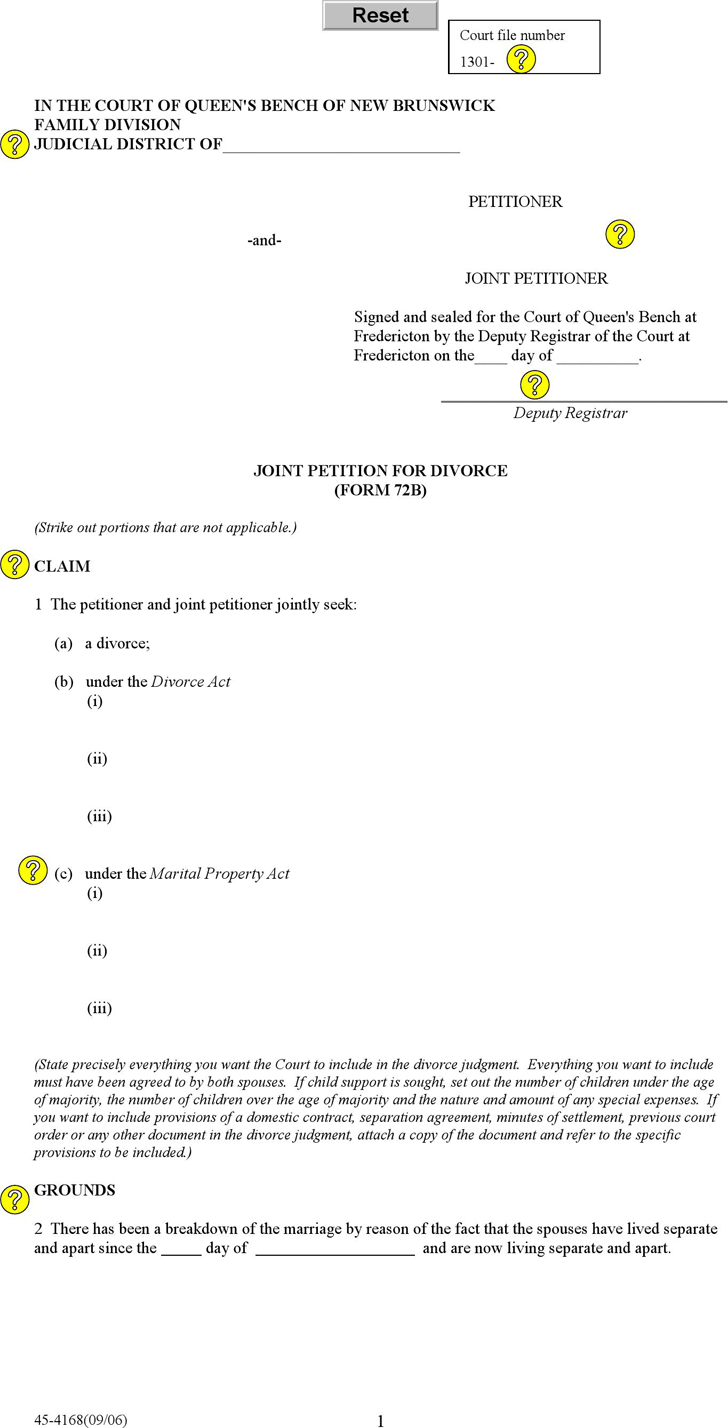 45-4168(09/06)
1
IN THE COURT OF QUEEN'S BENCH OF NEW BRUNSWICK
FAMILY DIVISION
JUDICIAL DISTRICT OF_____________________________
PETITIONER
-and-
JOINT PETITIONER
Signed and sealed for the Court of Queen's Bench at
Fredericton by the Deputy Registrar of the Court at
Fredericton on the____ day of __________.
Deputy Registrar
___________________________________
JOINT PETITION FOR DIVORCE
(FORM 72B)
(Strike out portions that are not applicable.)
CLAIM
1 The petitioner and joint petitioner jointly seek:
(a) a divorce;
(b) under the Divorce Act
(i)
(ii)
(iii)
(c) under the Marital Property Act
(i)
(ii)
(iii)
(State precisely everything you want the Court to include in the divorce judgment. Everything you want to include
must have been agreed to by both spouses. If child support is sought, set out the number of children under the age
of majority, the number of children over the age of majority and the nature and amount of any special expenses. If
you want to include provisions of a domestic contract, separation agreement, minutes of settlement, previous court
order or any other document in the divorce judgment, attach a copy of the document and refer to the specific
provisions to be included.)
GROUNDS
2 There has been a breakdown of the marriage by reason of the fact that the spouses have lived separate
and apart since the
day of and are now living separate and apart.
Court file number
1301-
Reset
Next
Download
New Brunswick Joint Petition for Divorce Form
PDF | 85 KB | 10 Pages
Previous