At Speedy Template, You can download Scholarship Essay Example . There are a few ways to find the forms or templates you need. You can choose forms in your state, use search feature to find the related forms. At the end of each page, there is "Download" button for the forms you are looking form if the forms don't display properly on the page, the Word or Excel or PDF files should give you a better reivew of the page. 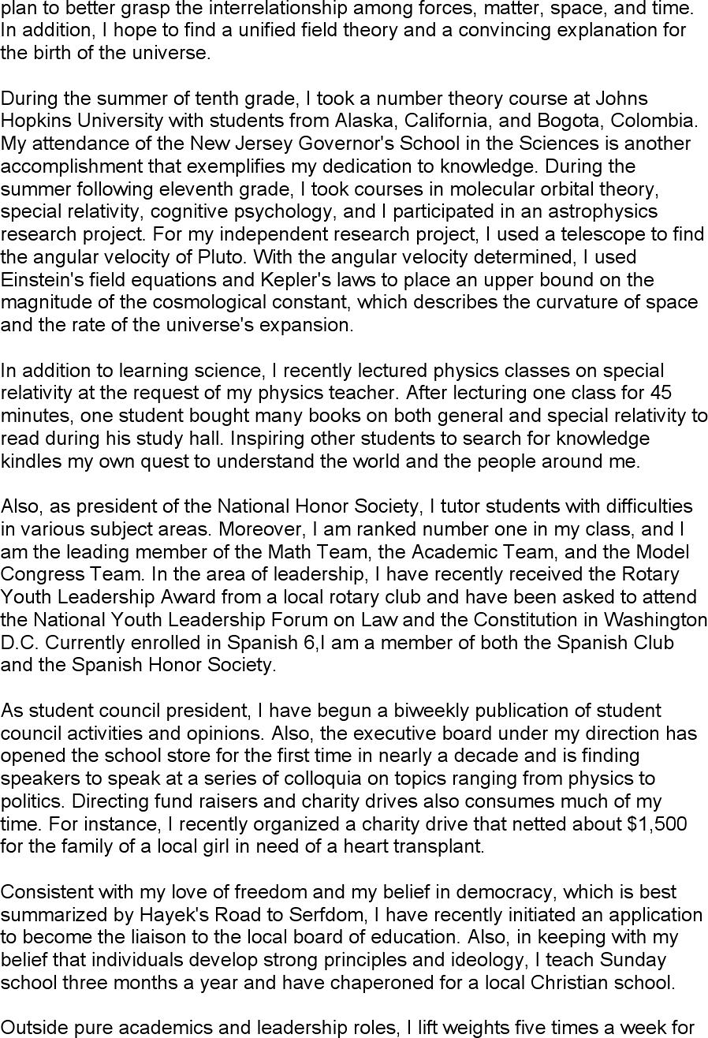 plan to better grasp the interrelationship among forces, matter, space, and time.
In addition, I hope to find a unified field theory and a convincing explanation for
the birth of the universe.
During the summer of tenth grade, I took a number theory course at Johns
Hopkins University with students from Alaska, California, and Bogota, Colombia.
My attendance of the New Jersey Governor's School in the Sciences is another
accomplishment that exemplifies my dedication to knowledge. During the
summer following eleventh grade, I took courses in molecular orbital theory,
special relativity, cognitive psychology, and I participated in an astrophysics
research project. For my independent research project, I used a telescope to find
the angular velocity of Pluto. With the angular velocity determined, I used
Einstein's field equations and Kepler's laws to place an upper bound on the
magnitude of the cosmological constant, which describes the curvature of space
and the rate of the universe's expansion.
In addition to learning science, I recently lectured physics classes on special
relativity at the request of my physics teacher. After lecturing one class for 45
minutes, one student bought many books on both general and special relativity to
read during his study hall. Inspiring other students to search for knowledge
kindles my own quest to understand the world and the people around me.
Also, as president of the National Honor Society, I tutor students with difficulties
in various subject areas. Moreover, I am ranked number one in my class, and I
am the leading member of the Math Team, the Academic Team, and the Model
Congress Team. In the area of leadership, I have recently received the Rotary
Youth Leadership Award from a local rotary club and have been asked to attend
the National Youth Leadership Forum on Law and the Constitution in Washington
D.C. Currently enrolled in Spanish 6,I am a member of both the Spanish Club
and the Spanish Honor Society.
As student council president, I have begun a biweekly publication of student
council activities and opinions. Also, the executive board under my direction has
opened the school store for the first time in nearly a decade and is finding
speakers to speak at a series of colloquia on topics ranging from physics to
politics. Directing fund raisers and charity drives also consumes much of my
time. For instance, I recently organized a charity drive that netted about $1,500
for the family of a local girl in need of a heart transplant.
Consistent with my love of freedom and my belief in democracy, which is best
summarized by Hayek's Road to Serfdom, I have recently initiated an application
to become the liaison to the local board of education. Also, in keeping with my
belief that individuals develop strong principles and ideology, I teach Sunday
school three months a year and have chaperoned for a local Christian school.
Outside pure academics and leadership roles, I lift weights five times a week for
Previous Next
Download
Scholarship Essay Example
DOC | 41 KB | 6 Pages
Previous