At Speedy Template, You can download Colorado Statutory Power of Attorney Form . There are a few ways to find the forms or templates you need. You can choose forms in your state, use search feature to find the related forms. At the end of each page, there is "Download" button for the forms you are looking form if the forms don't display properly on the page, the Word or Excel or PDF files should give you a better reivew of the page.
The Colorado statutory power of attorney is a statutory form of Colorado used by the grantor to authorize the attorney-in-fact to act on his/her behalf in his/her property and other related matters. 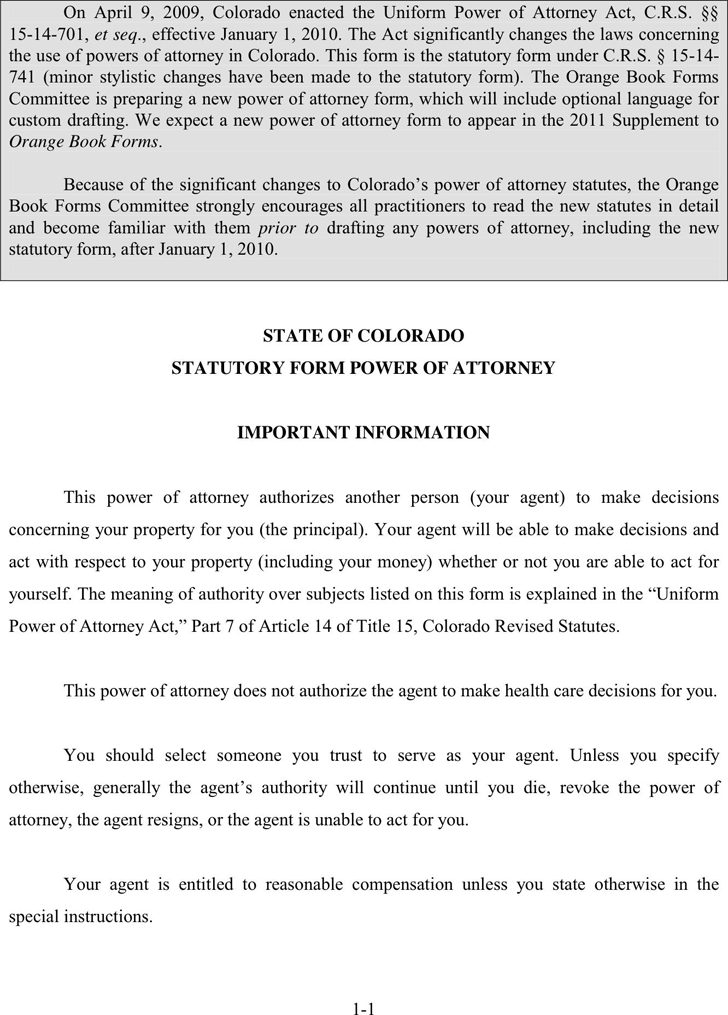 1-1
On April 9, 2009, Colorado enacted the Uniform Power of Attorney Act, C.R.S. §§
15-14-701, et seq., effective January 1, 2010. The Act significantly changes the laws concerning
the use of powers of attorney in Colorado. This form is the statutory form under C.R.S. § 15-14-
741 (minor stylistic changes have been made to the statutory form). The Orange Book Forms
Committee is preparing a new power of attorney form, which will include optional language for
custom drafting. We expect a new power of attorney form to appear in the 2011 Supplement to
Orange Book Forms.
Because of the significant changes to Colorado’s power of attorney statutes, the Orange
Book Forms Committee strongly encourages all practitioners to read the new statutes in detail
and become familiar with them prior to drafting any powers of attorney, including the new
statutory form, after January 1, 2010.
STATE OF COLORADO
STATUTORY FORM POWER OF ATTORNEY
IMPORTANT INFORMATION
This power of attorney authorizes another person (your agent) to make decisions
concerning your property for you (the principal). Your agent will be able to make decisions and
act with respect to your property (including your money) whether or not you are able to act for
yourself. The meaning of authority over subjects listed on this form is explained in the “Uniform
Power of Attorney Act,” Part 7 of Article 14 of Title 15, Colorado Revised Statutes.
This power of attorney does not authorize the agent to make health care decisions for you.
You should select someone you trust to serve as your agent. Unless you specify
otherwise, generally the agent’s authority will continue until you die, revoke the power of
attorney, the agent resigns, or the agent is unable to act for you.
Your agent is entitled to reasonable compensation unless you state otherwise in the
special instructions.
Next
Download
Colorado Statutory Power of Attorney Form
PDF | 161 KB | 11 Pages
Previous